The Legend of Zelda: A Link Between Worlds is an action-adventure game developed and published by Nintendo for the Nintendo 3DS. It is the 16th installment in The Legend of Zelda series and a sequel to the 1991 Super Nintendo Entertainment System game A Link to the Past. Announced in April 2013, A Link Between Worlds was released in Australia, Europe, and North America in November 2013. A month later, it was released in Japan as The Legend of Zelda: Triforce of the Gods 2 (Triforce of the Gods being the Japanese title of A Link to the Past).

Players play as a young adventurer, Link, who sets out to restore peace to the kingdom of Hyrule after the evil sorcerer Yuga captures Princess Zelda and escapes through a rift to the ruined world of Lorule. Yuga seeks to kidnap the Seven Sages and use their power to resurrect the Demon King Ganon. Link is granted the ability to merge onto walls as a painting after obtaining a magic bracelet and encountering Yuga, which allows Link to reach previously inaccessible areas and travel between Hyrule and Lorule. 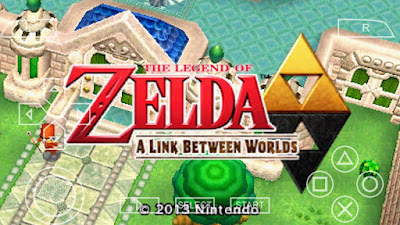