Portal is a series of first-person puzzle-platform video games developed by Valve. Set in the Half-Life universe, the two main games in the series, Portal (2007) and Portal 2 (2011), center on a woman, Chell, forced to undergo a series of tests within the Aperture Science Enrichment Center by a malicious artificial intelligence, GLaDOS, that controls the facility. Most of the tests involve using the “Aperture Science Handheld Portal Device” – the “portal gun” – that creates a human-sized wormhole-like connection between two flat surfaces. The player-character or objects in the game world may move through portals while conserving their momentum. This allows complex “flinging” maneuvers to be used to cross wide gaps or perform other feats to reach the exit for each test chamber. A number of other mechanics, such as lasers, light bridges, tractor funnels and turrets, exist to aid or hinder the player’s goal to reach the exit.

The Portal games are noted for bringing students and their projects from the DigiPen Institute of Technology into Valve and extending their ideas into the full games. The portal concept was introduced by the game Narbacular Drop and led to the basis for the first game. Another game, Tag: The Power of Paint, formed the basis of surface-altering “gels” introduced in Portal 2. 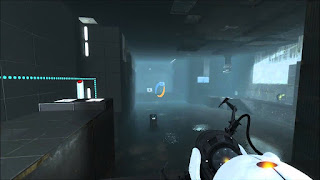 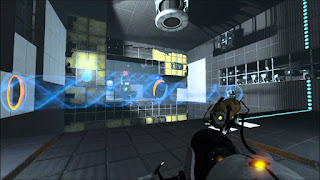