With its karmic decision-making and the chance to be a superhero or supervillain, Infamous brought something different to the traditional open-world game experience. With Second Son the series is reborn for the next generation, though it departs from the formula by abandoning the protagonist of the previous games and expanding on the superpowers available. It is set seven years after the end of Infamous 2, and the world has changed – superpowered “conduits” are hunted and Seattle is under the thumb of the repressive Department of Unified Protection.

As skate-punk graffiti artist Delsin Rowe you initially have smoke powers that can be used for good or ill as you roam the city undertaking missions. Your behaviour impacts upon how the story progresses. Whether you choose to execute or spare enemies, heal pedestrians or end their suffering, or get involved in drug busts, will all have a bearing on whether you’re seen as a hero or villain. This in turn affects how the citizens of Seattle will view and treat you, as well as the other characters in the game, opening up some intriguing narrative possibilities.

This creates a vibrant, living story with solid replayability as you test how things would turn out if you are just a bit nicer.

The developers have made novel use of the PS4 controller’s motion abilities and touchpad, and there are some very nice touches with the built-in speaker.

Battles are frantic, although perhaps a little samey at times, and pretty tough when you’re starting out with only a limited number of abilities, but the destructible landscape is a great leveller. Bringing a hulking metal arch down on top of a gaggle of foes with a carefully placed projectile makes for some jaw-dropping moments and shows the kind of detail that the PS4 is capable of providing.

Any feeling of being underpowered doesn’t last as all your powers can be increased by absorbing shards – granting new abilities through upgrades. It’s a far cry from the original’s sole reliance on electricity-based skills; without wanting to spoil anything, there’s an array of superpowered flavours as the game progresses.

As with all sandbox games, the world is key to the enjoyment of the experience; here Seattle has been reconstructed lovingly. The streets are filled with enemies and pedestrians, and there’s a decent variety of side-missions to distract from the main narrative thrust. While the free-running mechanic doesn’t feel as intuitive as it could, this remains an exhilarating thrill-ride that showcases the heft of the PS4. 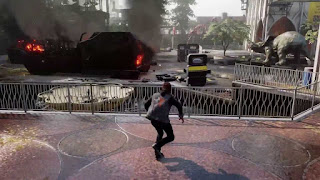 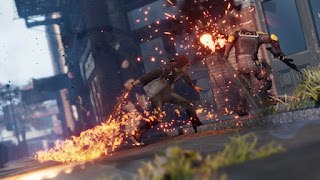 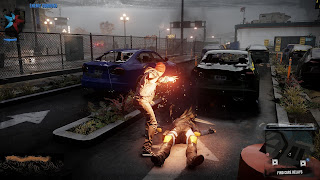